Pakistan Is for the Peaceful 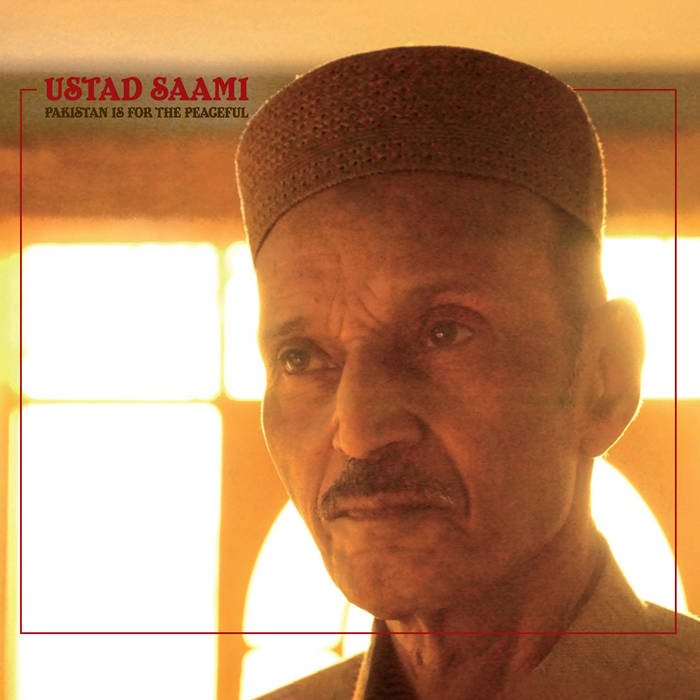 Cosmographer You are facing a waterfall, eyes open. The water is a continuous stream. You focus. Slowly you distinguish the drops and the droplets; you focus more intently, and each single drop appears as the unique entity that it is. You sharpen your focus, and the entire entity that is the waterfall now appears as what it is: singularities in concert. This music is the waterfall.
Favorite track: Prayer for a Saint.

Joel Eisenkramer I had the incredible blessing of hearing the Ustad perform ragas in New York City at the Chhandayan All Night concert. His performance was the most soulful and touching concert maybe I have ever heard. Tears were in all of our eyes.
Thanks to all in producing these recordings.
My only wish is that there were notes on which ragas these performances are, as it is important for the survival and proliferation of this music to maintain the link with Indian classical music.

Following his 2019, critically acclaimed debut, God Is Not a Terrorist, 49-note scale microtonal vocal master Ustad Saami returns with an epic part two. Pakistan is for the Peaceful presents an even more immersive work, comprised of just three extended tracks and again produced 100% live at the master’s rooftop home in Karachi by Grammy-winner, Ian Brennan (Tinariwen, Zomba Prison Project, The Good Ones) with musical accompaniment provided by Ustad’s four sons.

Ustad Saami is the last living Surti master, a precursor of the ancient, Islamic devotional music of qawwali. Even under threat of Islamic fundamentalists, the master has spent his life as a dedicated practitioner of a vanishing art — one that has been passed on from generation to generation since the 13th century. As The Quietus noted: “when Ustad Saami dies, these forty-nine notes die with him.”

At age seventy-six, Ustad still practices from 4 AM to noon most days, drilling himself with exercises. Though his physical hearing has declined and he requires in-ear aides for daily communication, his powers of perception continue to rise. In the past year he has wooed festival audiences in the UK, mainland Europe, and Australia, with set lists often made-up of a single musical piece stretching non-stop for over an hour.

As a child, he was the chosen one from his family and his master forbid him to speak for years. During this period, he was only allowed to express himself vocally, not verbally. He studied for thirty-five years to perfect this system before he ever even stepped onstage. It was the same trajectory as puff pop-stars like Justin Bieber and the ilk, only inverted — they start performing prematurely and get even more flaccid over time.

Instead, Ustad explores the subtlety of human emotion through microtones, an attempt to turn “negatives positive” through the reclamation of those tones deemed out-of-tune.

Following Saami’s debut album, a World Music expert in Los Angeles was flummoxed that she could not find any reference to the master’s system on the internet. Ironically, this absence of reference actually stands as proof rather than refuting his rarity. It cannot be found elsewhere precisely because it is his system— a customized work of recovery— with Ustad the only living vocal practitioner.

Ordering from the USA / Australia?
Due to the rapidly developing coronavirus situation, the German
Post/DHL has suspended all standard budget shipments to the USA and Australia for an indefinite period of time.
As of today, the cheapest way for us to ship items to the USA / Australia is via DHL standard. The price is 29€ and on top of that, there is an additional 6€ "hazard fee" added to all such shipments. The combined shipping total is now a steep 35€.

Recorded live at the master’s rooftop home in Karachi, Pakistan in 2018.

Ustad Saami is the last living Surti master, a precursor of the ancient, Islamic devotional music of qawwali. Even under threat of Islamic fundamentalists, the master has spent his life as a dedicated practitioner of a vanishing art — one that has been passed on from generation to generation since the 13th century. ... more

Bandcamp Daily  your guide to the world of Bandcamp

outré black metal, with a Victory Over the Sun interview and music from Liturgy and Jute Gyte.